2. Measurement: VEZIGRIP NON-SLIP SOLUTIONS then uses a professional –grade Tribometer to assess the Dynamic Coefficient of Friction ( D.C.O.F ) of your floors, to determine if your floors meet ANSI 326.3 standards.

3. Certified Treatment: We prefer to first treat a small area with our proprietary process, at NO COST TO YOU, so you can experience the difference between the “treated” and “untreated” surfaces. Once you have approved the full service, we will apply the “micro-tread” treatment to your entire floor, until your SCOF exceeds OSHA/ADA guidelines.

4. Follow-up: During our warranty period if you suspect an area we treated has become slippery, give us a call. 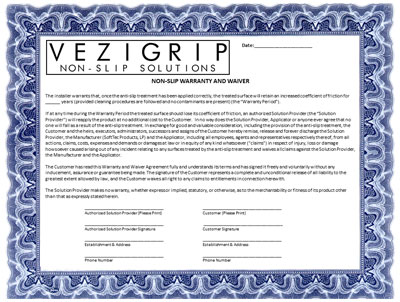 Prior to 2012, the coefficient of friction (slip resistance) for ceramic tile was tested using the method specified in ASTM C1028, which provided the Static Coefficient of Friction (SCOF). In this test, water was placed on the floor and a weighted plate with a sensor was placed over the water. The sensor measured the force required to set the weighted plate in motion. However, this test is not appropriate for measuring the slipperiness of floors since people are generally already in motion and are trying to STOP slipping instead of trying to start slipping. In addition, the testing method was susceptible to variations in running the test including human error. ASTM C1028 was deemed to be ineffective at measuring the slipperiness of floors.

In 2012, the American National Standards Institute updated their ANSI 137.1 standard to change the measurement system for tile slip resistance to DCOF, or Dynamic Coefficient of Friction. The new test measured the amount of force required to keep an object in motion as it slides over a tile. This new test better reflected real life situations where a person slips on wet tile. The new test is called the DCOF Acutest.

ANSI 137.1 was updated again in 2017. The new update incorporates ANSI 326.3, which is the American National Standard Test Method for Measuring Dynamic Coefficient of Friction of Hard Surface Flooring Materials. This standard provides a test method, but also includes discussion about how the wet DCOF value of 0.42 is acceptable as a minimum value for surfaces that are expected to be walked on when wet with water. The standard can be downloaded from the Tile Council of North America.

The International Building Code references ANSI A137.1 as the standard for installation of ceramic tile.

The device used to measure the new DCOF is called a tribometer and the most common device used is the BOT-3000. It is a fully automatic device that drags itself across the floor and measures the slip resistance of a rubber pad that is attached to the bottom of the device. Human interaction is not required, except for the press of a button to start the test, so the results are more reliable than the old SCOF tests. 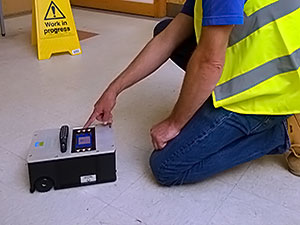 The new measurements in ANSI 137.1-2017 and ANSI A326.3 require that tiles wet with water have a minimum slip resistance of 0.42 DCOF. Keep in mind that this is a minimum level of slip resistance for level interior floors that are wet with water. Other situations, such as standing water, oil, grease, or other slippery substances, may require higher DCOF numbers.

It is also important to point out that a DCOF of 0.42 doesn’t necessarily equate to a safe floor; nor does a DCOF below 0.42 indicate a dangerous floor. For instance, A326.3 points out that hard surfaces with a DCOF of less than 0.42 are often used in shopping malls and hotel lobbies, but the materials are kept dry and safe cleaning procedures are used. The specifier of hard flooring materials must make a floor selection based on many factors that can affect occupant safety.

Coefficient of Friction (COF) is defined as the friction force opposing sliding motion divided by the force normal to the surface.

Including the presence of moisture, contaminants or dirt, and a 0.6 COF should be demanded for safety.

The higher the number, the lower probability of a slip occurring. Per NFSI B101.1 SCOF > .60 is considered “High Traction”. All Vezigrip Non-Slip Solution products fall into this tier of High Traction.

The anti-slip qualities of the tile or floors alone do not make walking safe in risky situations. Many factors are involved, and all should be taken into consideration at the planning and installation stages: